Nick Vujicic – “I was never crippled until I lost hope.”

Well, many of you already know about Nick Vujicic but for some, Nick Vujicic might be a new name. Trust me, after reading this blog, you are definitely going to search more about him. 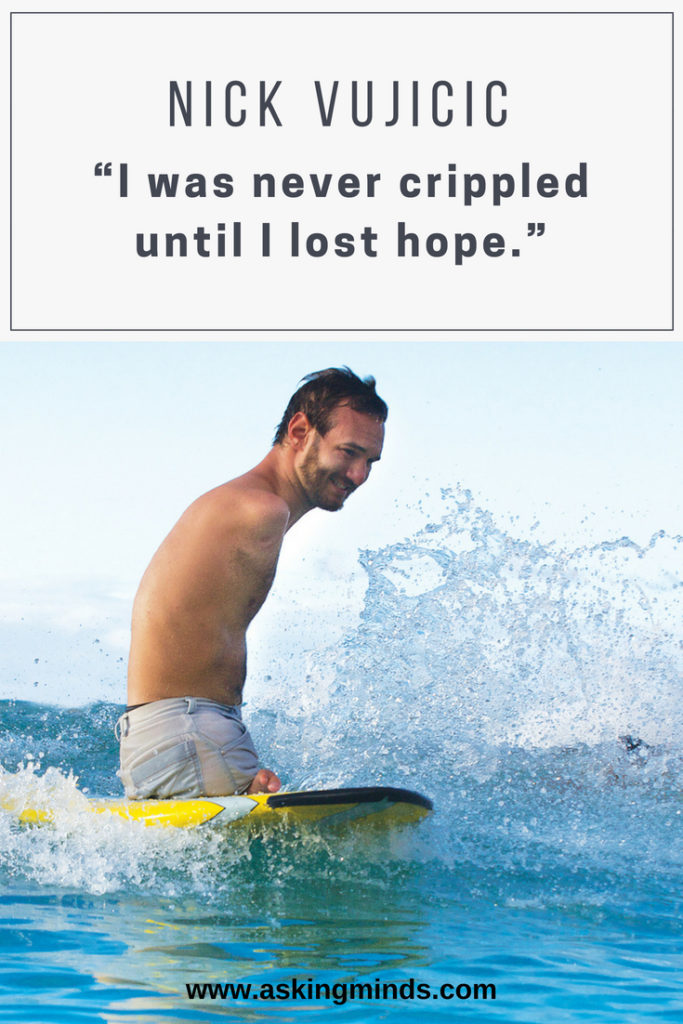 Okay so who is Nick Vujicic?

Nicholas James Vujicic (Nick Vujicic) was born in 1982 in Brisbane, Australia. He is one of the best-selling author and a motivational speaker. He is also president of an international non-profit organization. Oh, wait! Did I not mention that he was born without arms and legs? Yeah well, the doctors had no explanation for it and till date, it’s a mystery. They call it phocomelia, which means being born without limbs.

When he was 10 years old, he tried to drown himself but failed. While sharing his story with Khaleej Times, Nick Vujicic said,” My parents and teachers helped me to be thankful for what I have, to do my best and to trust God with the rest.” He explains that spending life comparing oneself to others who are better, richer, more beautiful is bound to breed discontent.

He mentioned, “I was also angry at being bullied in school and feeling like a burden on my parents. But at 15, I was fascinated by the story of Jesus Christ, when I read about him healing a blind man and giving him purpose. I don’t need arms and legs in life, but I do need meaning and hope in an eternal life. I asked God to come into my life, take control and reveal his plan for my life.” 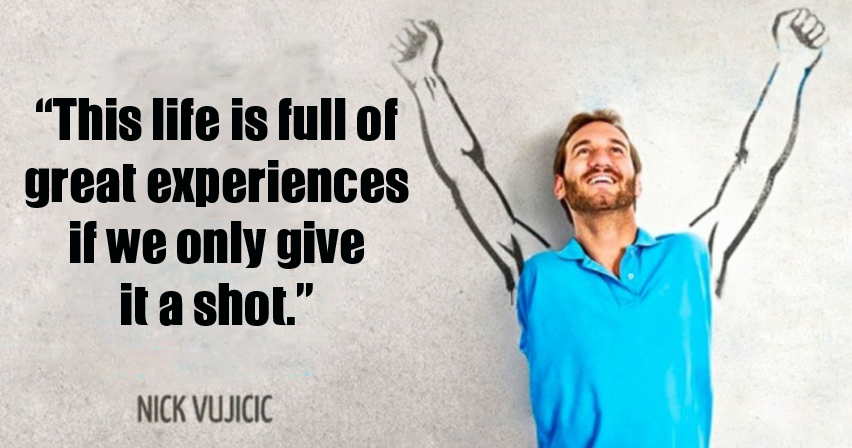 If you can’t get a miracle, become one. –  Nick Vujicic

When Nick was 17, he started giving speeches at the church’s prayer group, where his mother used to work. He did his graduation in commerce from Griffith University having major in accountancy and financial planning.

At the age of 19, Nick met a man who was dying of Lou Gehrig’s disease. Even after five years of constant suffering, that man never complained. He made a website to inspire people all over the world who were bedridden to never give up and believe in heaven. Nick said, “I then realised that even if you don’t get a miracle in your life, you can be a miracle for someone else.” 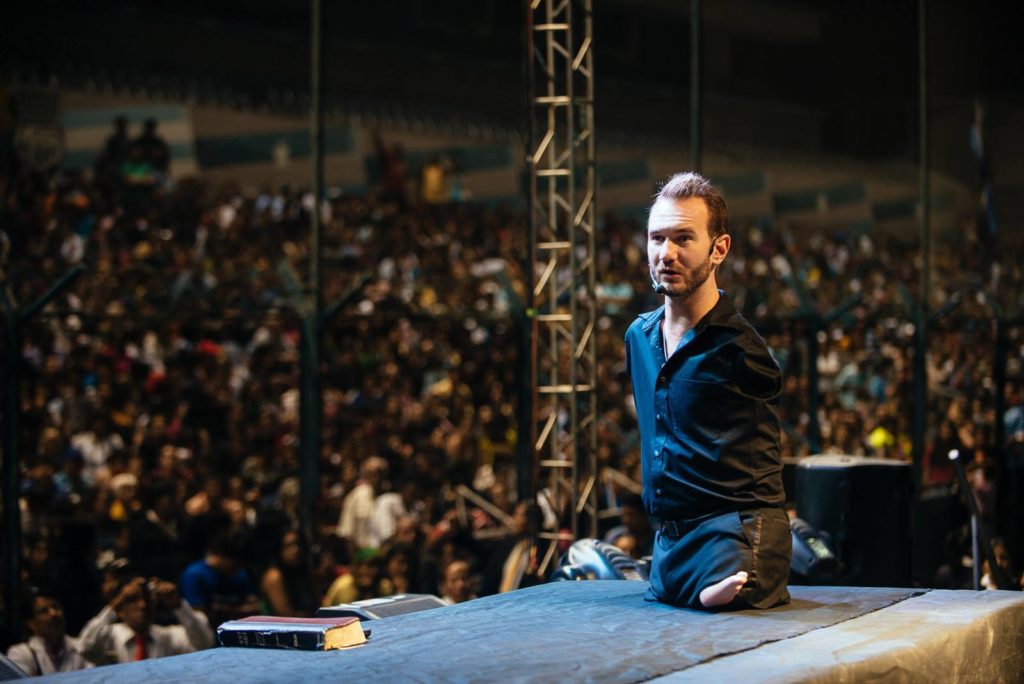 Nick then started travelling the world, sharing his story with millions of people. According to him, “The best feeling of being a motivational speaker is that every time you get up in front of an audience, you know that at least one person will be changed forever.” He has since spoken over 3,000 times in a total of more than 60 countries on topics as varied as bullying, inspiring positive change, persistence and determination, and his own life story.

In 2005, Nick founded ‘Life Without Limbs’, an international non-profit organisation to spread the message of the life he experienced with great inspiration and a strong determination. And in the year 2007, his motivational speaking company ‘Attitude is Altitude’ was launched.

Nick Vujicic met Kanae Miyahara in 2008, daughter of a Japanese agricultural engineer and a Mexican mother based in Texas. When Kanae once listened to his motivation speech, she was overwhelmed. She readily agreed to marry Nick Vujicic and the couple got married in 2012.

Nick Vujicic is a self-made wonder who can write, paint, dance, swim and he can also do skydiving.

In 2009, Nick was awarded Best Actor in a short film at the Method Film Fest for his role in Butterfly Circus, which also won the Best Short Film award. I recommend you all to watch this movie right away –

And, here is the best-seller, written by Nick Vujicic which you must read – Life Without Limits: Inspiration For A Ridiculously Good Life. 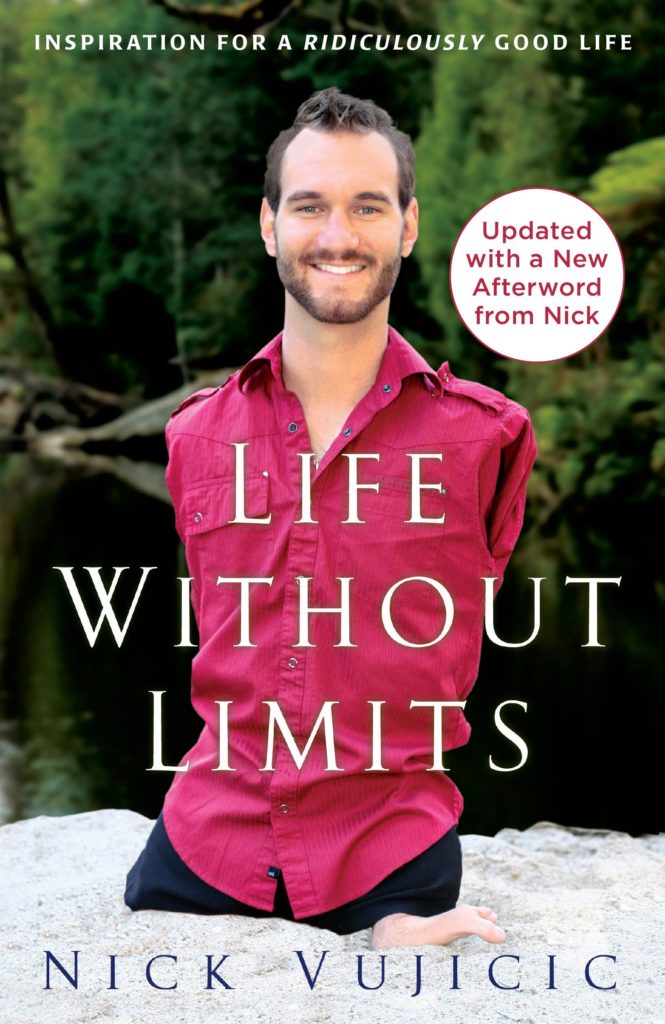 “This life is full of great experiences if we only give it a shot.” – Nick Vujicic