The history of Mewar proudly speaks of many women who described the true meaning of courage and sacrifice. From Rani Padmavati to Meera, Mewar had many gems to count on. In this list, there is a Mother whose sacrifice was unparallel. Her loyalty and patriotism had no boundaries. Her name is Panna Dai.

She sacrificed her own son for the sake of Mewar’s future. You must be thinking, how can a mother do that? Well, be ready to dive deep into the ocean of sacrifice. Her courage and loyalty might give you goose-bumps. You will feel her suffering. You will imagine what she went through.

Here I present, a story of immeasurable sacrifice and loyalty. From the land of Mewar, where, her story is written in golden words. She was a warrior who never broke down, not even when her son was slaughtered with the sword before her. 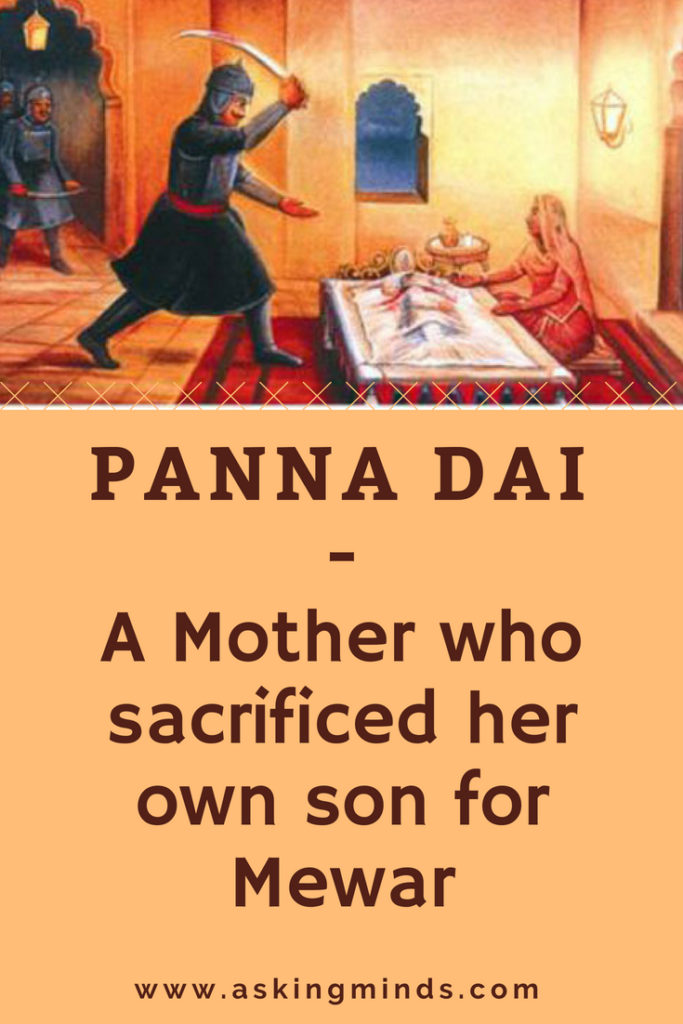 Panna Dai – A woman of substance

For those who don’t know, ‘Dai’ means a caretaker or a second mother. And as an additional information, let me tell you that Panna means emerald. (Ok, that was not needed. Never mind!)

Panna Dai used to take care of Udai Singh, son of Rana Sanga. Well, not only she took care but was also given the responsibility to breastfeed Udai. In short, Panna Dai was Udai’s second mother. Now, not to forget, Panna Dai was a widow. She had a son named Chandan who was of the same age as Udai. From the day of Udai Singh’s birth, Panna always looked after him as his own son.

So, what exactly happened?

For the next some minutes, let’s head back our imaginations to the 16th century. The time when Mewar was surrounded by conspiracy and evil thoughts. At that time, Mewar was in the hands of Maharana Sangram Singh whose dedication and warrior ship earned him the title of ‘Rana Sanga’.

Udai Singh was born in 1522. He was the youngest among them. He was just an infant when his father, Rana Sanga took his last breathe in 1528. It is said, he was poisoned by his own chieftains after the battle of Khanwa in which they were defeated. It was an entirely hard phase to cope for Mewar. Bhojraj was also killed while fighting for Mewar in 1526 when Rana Sanga was alive. After Rana Sanga’s death, his eldest son ascended the throne as Rana Ratan Singh. He just ruled Mewar for four years (1528 to 1531) as he died in a battle.

Vikramaditya was an immodest and disrespectful King. His arrogance was intolerable. Once, Chittorgarh was attacked by Bahadur Shah of Gujarat in 1535. With a small force of nobles and their armies, Vikramaditya fought back. As a result, he lost the battle and Chittor was dismissed. Bahadur Shah then returned back to Gujarat.

During this battle, Rani Karnavati asked Panna Dai to take Udai with her and head on towards Bundi. Some loyal servants also went with them. When the situation was stable, both Udai Singh and Vikramaditya returned to the capital. Even after the defeat, Vikramaditya was all same as before, an arrogant and vile-tempered ruler.

In 1536, Vikramaditya’s behavior crossed all the limits. He abused a respected old chieftain at the Court. As a lesson, Vikramaditya was punished and sent to palace arrest by nobles. Thus, the youngest of all, Udai Singh was declared as ‘The New King of Mewar’.

Udai Singh was too young to take the responsibility of Mewar and understand political matters. So, the nobles invited Banvir to guard Udai Singh as well as to take care of other matters as his regent. Well, Banvir was the illicit son of Udai’s Uncle or let’s say Rana Sanga’s elder brother, Prithviraj. Prithviraj was actually the Crown Prince but because of his fight with Rana Sanga, he was sent to exile. He eventually died there.

Prithviraj never succeeded to rule as Maharana of Mewar. In a way, Banvir considered himself as the rightful heir to the throne. But, he had two hurdles in his way. Banvir somehow conspired to kill both the hurdles. I mean brothers. (Obviously Duh!) Taking advantage of Vikramaditya’s arrest, Banvir assassinated Vikramaditya. Now, he hurried towards the only remaining hurdle to his ambition, the 14-year-old, Udai Singh. 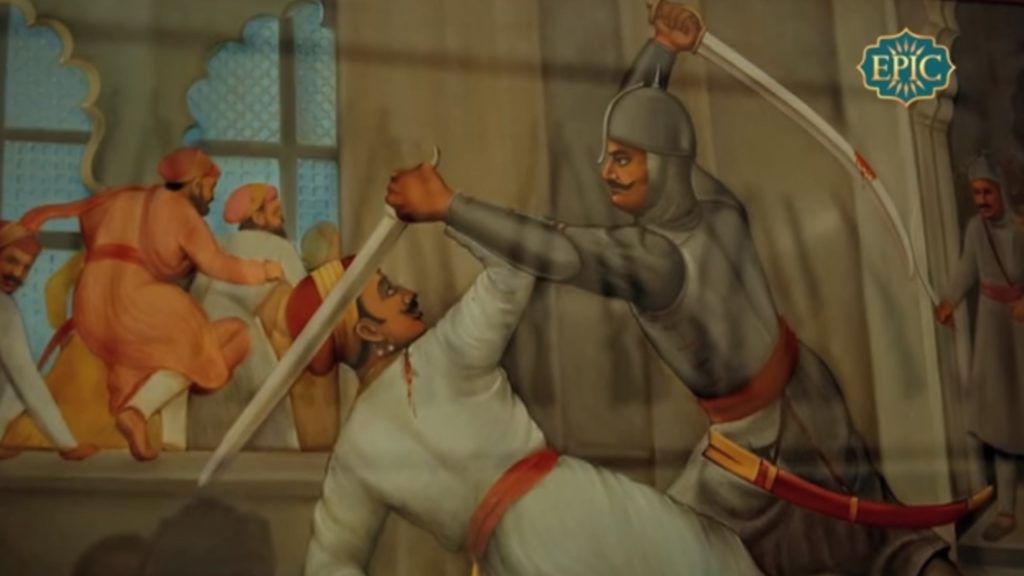 Did he really kill Udai Singh?

It was the night. Panna Dai arranged the bed for both Chandan and Udai and asked them to sleep. In a few minutes, a maidservant who was aware of Banvir’s intention hurried and informed Panna Dai that Banvir was coming with a sword in hand to kill Udai Singh. She realized what Banvir was up to. She also knew that Udai Singh is the last hope to save Mewar.

Both Udai and Chandan were sleeping firmly. She instructed the loyal servant to take the Udai Singh into a large basket filled with flowers and safely draw him out of the reach of Banvir, by the bank of the river. She said, she would join them there. After the servant left, She summoned all her courage and lifted her only reason to live, Chandan from his bed and placed him on Prince’s bed, covering him with a blanket. She knew what was going to be the result of her decision but she also knew what was necessary.

A blood-thirsty sword was on its way to take Udai Singh’s life. Well, Banvir had no idea whose life his sword was going to take. In a moment, Banvir entered the room. When asked about Udai Singh, Panna Dai pointed towards the bed. The moment of horror took place. Panna saw how Banvir murdered her son. A part of her wanted to cry her heart out but she had no reaction at all, as if she wanted to deny it, all of it.

Soon after this, Banvir informed the gathered chiefs in a meeting at court that both Vikramaditya and Udai were dead. He then proclaimed himself as the new King of Mewar. When Banvir was celebrating his victory, Panna Dai was standing still, seeing her son’s cremation. The rollercoaster of emotions hit her hard. She knew, there was no time to shed tears which were actually tearing her apart from inside. Her life turned upside down in a blink of an eye. 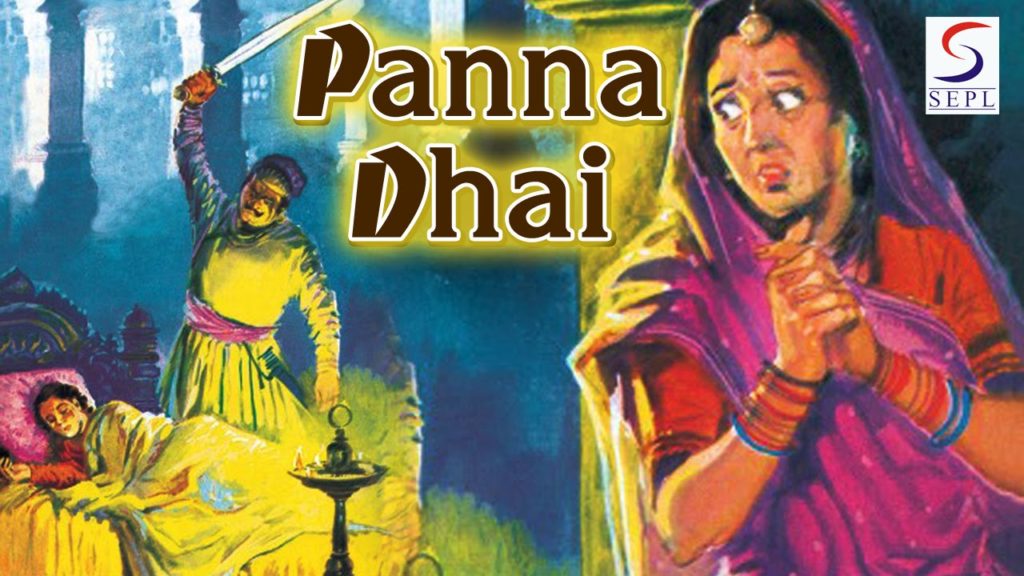 Panna Dai then packed necessary items in a bag and hurried towards the river. She then decided to up-bring Udai in a different place where he will be safe and no one will know them. The loyal servants took the oath for Mewar’s future, never to mention a word of what had happened that tragic night.

After several weeks, while she was in search of help from other chieftains, they arrived at Kumbhalgarh. The local governor of Maheshwari cast named Asha Devpura Shah agreed to provide them with a roof. For a couple of years, Udai Singh was known as Asha Shah’s nephew.

Four years passed and Udai Singh was married to a Rajput Princess. In 1540, when Udai Singh was 18, Panna knew he was ready to defeat Banvir. Thus, Panna Dai contacted chieftains of Mewar and revealed to them the full story of the deception and the escape.

After knowing the truth, Rajput chieftains joined Udai Singh in the revolt against Banvir. He marched on Chittor to reclaim his throne with the help of Mewar and Marwar force. Thus, Banvir was defeated, in the battle fought near Maholi.

At last, Udai Singh rode to his kingdom and was crowned as the Maharana of Mewar. Mewar was in the right hands, because of just one lady. The lady who sacrificed her own son for Mewar. The Iron Lady!

Panna Dai was like a mother to Udai Singh. Well, I guess there is no doubt in that after what she did. Udai Singh knew there was no way he could repay what Panna Dai did for him and Mewar. Not only Udai Singh but the whole Mewar was in debt to Panna Dai’s incomparable sacrifice.

For Panna Dai, it was her duty to save Mewar’s future. She kept going on like she has never been hurt, despite having been.”

From that point of time, Panna Dai’s story slowly faded away and nobody knows what happened to her.

Though Panna Dai was not a queen but she was no less than that. I can write a lot about her but she is not a woman whose sacrifice can be expressed in a few words.

You must be thinking, why she didn’t took both Udai and Chandan and ran away? Well, she knew that Banvir will anyhow locate Udai and kill him. He would not stop before taking Udai’s life which was the reason, she took that dreadful decision.

She gave a new meaning to the word ‘sacrifice’ and ‘loyalty’.

Wasn’t she ‘The Indian Wonder-woman’?

“The greatest sacrifice is when you sacrifice your own happiness for the sake of someone else.”

Read more such interesting blog: Barbarika – Story of “The Unsung Hero” from Mahabharata

Nick Vujicic – “I was never crippled until I lost hope.”