Before I wish you a very Happy New Year, there is something more important I would like to share with you. Something which I feel is necessary for you to understand.

Okay well, I have decided to address you in a unique way this time. You have read many blogs but today, I bring you a story to convey my message. 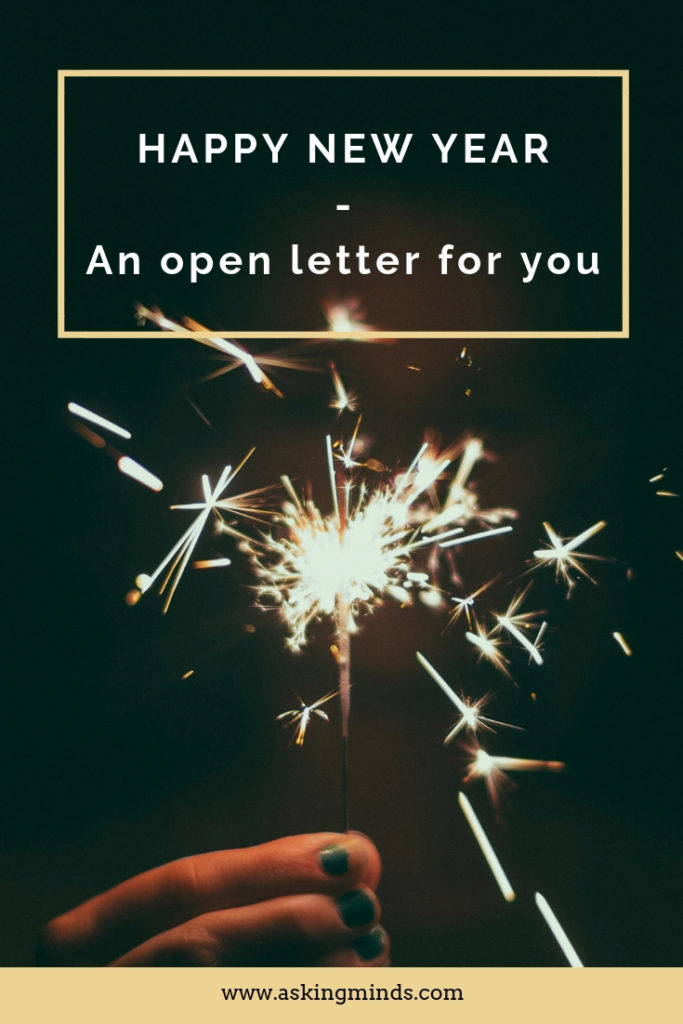 The flames of anger were scorching his soul. Deprived of sleep, once again he went to wander on the streets. The cold breeze of 5 a.m. was never his concern. The deadly combo of silence and darkness of the very morning was what soothed him. After all, this deadly combo was not only outside but also inside him.

Life was a battle, he was done fighting. He was tired of being constantly courageous when actually he was shaken and broken.

There it was, the bridge. The water below was calm and deep, exactly what he was seeking. He stood on the edge of the bridge many a time before looking at the flow but today, he was just tired of looking. He wished to emerge himself with depth. On one side was pain while on other was relief.

He chose relief. Relief from the suffering. And he…

Didn’t jump, actually couldn’t jump. An arm pulled him back before he could jump. Startled, he looked behind. A tall man in his jogging suit was there with disgust in his eyes. Disgust to what he just witnessed.

“Suicide is a coward’s way to go with”, the man said.

After a pause of several seconds, the man continued, “Are you alright young man?”

“It’s none of your business. Why do you have to save me?”, Aarav looked down angrily. His eyes couldn’t meet stranger’s eyes.

The stranger smiled and said, “So eager to leave this beautiful life. Come with me, I want to show you something. If it didn’t change your thoughts, I will push you myself down that river.

The stranger took Aarav to an orphanage called ‘The Patron’. It was now 8 in the morning. The sun was playing hide and seek and so were the kids.

“I am Shikhar, I manage this Orphanage,” said the stranger. He introduced Aarav to his wife and kids, a cute boy around 7 and a pretty girl around 17.

“Is that why you brought me here, to show me some orphans and your family? Do you think I care?” Aarav’s voice was blazing.

Not actually, said Shikhar. Come let’s sit somewhere for a while.

After passing through a number of kids, they finally stood before a bench, a little away from everyone.

“Would you mind if I tell you a short story?” asked Shikhar

Now that I am here, I guess I don’t have any option. Go on! said Aarav.

After a little hold, Shikhar started. “There was a man just like you, a little impulsive. He was married to his girlfriend and they had a two-year-old ‘super-cute’ daughter. His whole world revolved around his wife and his daughter. A hug from his daughter was all he craved for after a long working day.

Well, life isn’t all about happiness. A lot of other emotions are thrown at you in different ways. Isn’t it?

He lost both his wife and daughter in a car accident. In a way, he lost his reasons to live. You can even say, he lost the essence of life. Just like you, he tried to escape from life. From that very bridge, he jumped.

Do you need water? asked Shikhar. Aarav just nodded and asked if the man died?

He was saved fortunately, continued Shikhar. The initial days were hard though. He didn’t eat, sleep or meet anyone.

As it is said, time heals everything.

After a few months, he started making progress and met his old friends. One of them invited him to a family function. After meeting some of his friends, he went outside to smoke.

As he was going to light up the cigarette, his gaze turned to the opposite side of the function hall. There it was a garden where some children were playing. A small girl around 4 years old was running after a football, when she caught it, it slipped down from her tiny hands and reached the man.

A glimpse of his daughter ran through his mind. She just looked like her, playful! He walked towards her. As he got closer, the girl smiled at him, the same smile that used to calm him after a long day. Tears rolled down his eyes as bent a little to give her the football. The girl wiped his tears with her tiny fingers. “Granny says, never cry!”

A dark-skinned lady with a smile on her face arrived and introduced herself as the Granny of all the children.

The girl I was talking to –

“She’s cute, Isn’t she? Pari lost her parents a few months before” said the Granny.

Do you mind if I pay some visits to meet her?

Oh! You’re always welcome but she likes to be left alone.

After that day, he regularly went to the orphanage to meet the girl, bring her flower, foods, and gifts. Pari was always happy when he was around. They played every day and filled up their loneliness. They were both alone, you see, but together, each other’s reason to live.

Pari’s happy face was again dull as he didn’t visit her that day. She kept waiting for him looking through gate all day. Whenever a car stopped by at the gate, she stood up with excitement and then fell back with despair. Granny asked her why was she sad to which she didn’t answer. Some days went by and she stopped waiting. She thought he will never visit her again.

She was missing him badly.

After 7 days, he came with a cake as it was Pari’s birthday. She refused to celebrate and cried her eyes out. He asked Pari why was she crying?

“Why didn’t you come to meet me?” Pari retorted when she was calm.

“I was away for a business trip.”

“You don’t leave me alone, never”, she hugged him and they both cried. He was now the reason of Pari’s happiness, he understood.

He met Granny in the office, signed some papers and adopted Pari. They lived happily.

But wait! Something was missing, he thought to himself. He wished to fill Pari’s life with all the happiness in the world.

But he soon realized, Pari needed a mother. He then married a widow who was also part of the orphanage and Pari also liked her.

While Shikhar had a smile on his face, Aarav was fighting with tears.

Aarav was calm now. “I would like to meet the man you are talking about and the girl. Just want to ask him if my life is worth living?

Startled and confused, Aarav was thinking something when Shikhar said: “She’s Pari, my daughter”. You met her when we arrived here.

“Yes, I am that man who was left with no reason to live so I became Pari’s reason to live and she became mine. I chose a new beginning for me, for Pari. Now I have a family and I am happy and content. In fact, I am glad I didn’t die that day.” said Shikhar.

Aarav stood in silence, unable to think for a second.

But now I realized, what I was doing to my life because of someone who didn’t even care.

And you know what, just like you, I am also glad I didn’t die.

And then they went on with their lives.

Let’s not forget what we learned last year and let’s continue learning this year. Hope you all have a wonderful year ahead.

Now before I end this blog, I would like to appreciate Mayur Gaikwad for his terrific writing skills, without his help and guidance, this story wouldn’t have carved out so well. Thank you so much, Mayur!